When Leading by Example isn’t Enough

Reposting in honor of World Down Syndrome Day 2015

While on vacation recently, we attended a church breakfast to meet an esteemed colleague of Paul’s.  They had an adult daughter with significant disabilities. After speaking with the mom for a while, I called Mia over to say hi.  But the minute she saw this woman in the wheelchair, she hid behind my legs.   I tried to pry her fingers from me and make her say hello but she refused.

You could see the fear in her eyes.

And I was mortified.

Here her father and I have devoted our lives to loving people with special needs and their families.  To encouraging their parents and siblings. To spreading awareness about their abilities versus their disabilities.

And my own daughter was scared.

All she saw were the differences.  The wheelchair.  The drooling.  The erratic movements.

And I was so disappointed.  I wanted her to see what I saw.  A beautiful soul.  Someone who is as valuable as you and me.  A daughter, a sister, a friend.

Did I really expect my 4 yr old to run over and kneel down next to the wheelchair at the appropriate level?  To say hi and be ok with a non-verbal response?

I thought I had been leading by example. That she had watched me interact with all the students with special needs at my theatre program.  That she had seen Paul’s disability ministry and the way we accept and love all the kids in that program.

I thought that our strong example would set the tone for her own response when it came to interacting with people with special needs.

Isn’t that what we are supposed to do as parents?  Lead by example?

Maybe.  But sometimes it’s not enough.

Sometimes it’s the conversations that make the difference.  That drives home the point. That allows the other person to ask questions, to explore their own doubts and fears and judgments.  To bring to light topics that might otherwise remain hidden.

It’s not enough to merely not bully.  We have to talk to our kids about bullying.  It’s not enough to accept and honor people with disabilities, I need to talk to Mia about differences.  About each person’s uniqueness.  About how cool it is that people who don’t walk can use wheelchairs as their legs.  About the little boy in her Sunday school class who uses a communication device for his voice – because he does in fact have a voice.  And how we all have a voice – whether we communicate with words or expressions or with sounds or with a device.

Setting the example sends a strong message.  But sometimes, it’s not enough.

And so that is my plea today.  To not ONLY lead by example, but also to have those conversations.

And guess what, it’s not just for the kids. You might have some of your own fears and misconceptions.  That’s ok – it’s ok to recognize and acknowledge that you have those fears.  Those judgments.  But it’s not ok to hold onto them.  Not anymore. Educate yourself.  Volunteer somewhere.  Befriend someone different than yourself.  It will change the way you see the world and ultimately the way you see yourself.

I’m not talking about tolerance.  I kind of hate that word. Things I tolerate?  I tolerate my kids fighting for about 5 minutes.  Then I’m over it and someone is in trouble. I tolerate my husband watching 9,763 basketball games during March Madness because I know he loves basketball (and because I don’t tolerate Fantasy Football).  Tolerance is not the goal when it comes to loving others who are different from ourselves.

What I’m talking about is acceptance.  About seeing others as equals.  About focusing on the similarities WHILE appreciating the differences.  Because as we’ve all heard before, we really are more alike than different. 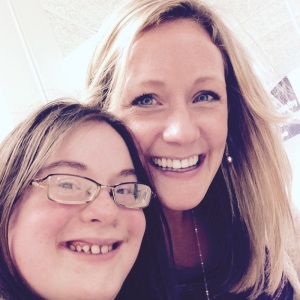 Today is World Down Syndrome Day. March 21st.  People with Down syndrome have an extra copy, a 3rd copy,  of the 21st chromosome – hence the significance of the date 3-21.  It is that extra chromosome which plays a role in the physical and developmental characteristics of someone with Down syndrome.  But that’s about it.  It doesn’t define their personality.  It doesn’t determine if they like the Cubs or the White Sox.  It doesn’t determine if they love to dance or play chess.

But that extra chromosome?  It does have power.

It’s got the power of unconditional love.

If you are lucky enough to know someone with Down syndrome or any developmental disAbility, be sure to thank them today for the difference they have made in your life.

Be intentional about befriending someone with special needs.

I promise, it will change your life for the better.

11 responses to “When Leading by Example isn’t Enough”